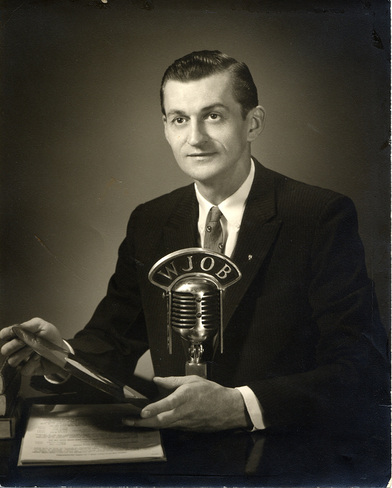 The first license issued to a radio Station in the Calumet Area was in 1923 to Hammond-Calumet Broadcasting Corporation on November 12, 1923 with Dr. George F. Courier and Lawrence J. Crowley as the licensees. It was renewed on May 27th, 1925 as Electric Park (The Alamo Dance Hall) with L.J. Crowley as the sole licensee. A transmitter was then built at the Alamo Dance Hall in Joliet, Illinois.

The broadcast facilities were moved shortly after that to the Hammond Douglas Park Area, where today it is know as Pulaski Park. A small studio was built on the northwest side of the park. It was at this site that my predecessor, Eddie Oskierko began his “Polish Musical Varieties Program” in 1929. From there, the broadcasting facilities were moved to a main studio at 402 Fayette Street (Fayette and Hohman Avenue), which today is know as the Calumet National Bank Building, and the call letters were then changed to WWAE. It remained at this address until the station was sold to O.E. Richardson, Fred L. Adair, and Robert C. Adair. The call letters were changed once again to the present WJOB on October 7, 1940.  The new owner then moved the main studios to 449 State Street, above the Millikan Building, across from the Edward C. Minas Department Store, and the name of the Corporation was changed to The South Shore Broadcasting Corporation.

It was during this time, that the station grew in popularity offering a variety of programming under the leadership of Sam Weller as the Programming Director. Some of the programs offered were the Happy Hour, which had a membership of 1200 young members and was broadcast every Saturday morning from 10:30 to 11:30 a.m. under the direction of Mrs. O.E. Richardson, the wife of one of the owners. The new programming schedule also included interesting programs in five foreign languages, including, Eddie Oskierko of the Polish Musical Varieties Program; Cornelius Szakatis of the Hungarian Hour; Monica Babinec of the Slovak Hour; Stella Luterfisk directing the Greek Hour; and Gilbert Vasquez as the director of the Spanish Program.

Included in the schedule of programming were Eddie Honesty of the “Rockin-in-Rythym” program, the first black program on WJOB heard every Wednesday from 3:15 to 4 o’clock and also on Saturday afternoons from 2 to 3 o’clock. The only black newscaster in the country was heard every Sunday at 1O a.m. Included in the programming were the Rev. Odell Reed, who conducted his services from 4635 State Street in Chicago, the first remote broadcast of Radio Station WJOB. Also included were Rev. William Carr and Clarence Parsons, with the Royal Quartet singing the well loved Negro spirituals.

One of the most popular shows of that era was the Sun-Dodgers show which featured every night from 12 o’clock in the evening until 4 a.m. with Wayne Osborne as the announcer and Dave Erickson as its Director. Not to be outdone, Women’s programming was conducted by Miss Kitty Blake who produced the “It Happened in Hammond” program daily at 11:15 a.m. and Frances Benson read stories for children each Friday at 1:15 p.m. Also featured at the time were all Lake County High Schools who took part in the “High Schools on Parade Program” heard every Thursday.

Some of the most notable Alumni of Radio Station WJOB included Frank Reynolds, who after leaving WJOB became an Anchor Man of Television Station WLS, Channel 7 for several years before moving on to become the Network Anchor Man for the National ABC Nightly News at 6 p.m. every evening. Also graduating from the WJOB studios was Hugh Hill, who became the Political Analyst for Channel 7 News, and is still today call upon as Political Analyst Emeritus. Following him were Jim Smith who for almost thirty years was the Farm Reporter for WBBM Radio in Chicago, Len Ellis, who distinguished himself as one of the countries leading Country and Western aficionados, Bob Umbelbee, who went on the become the News Director at Radio Station WGN in Chicago, and Felicia Middlebrook who is still at present the news anchor every morning on Radio Station WBBM, Chicago.

I would be very remiss in my presentation of this history of Radio Station WJOB if I did not include my predecessor, Eddie Oskierko, who began from very humble beginnings in presenting the “Polish Varieties Program” in 1929. His early beginnings on broadcasting are amazing. He was then employed at U.S. Steel, South Works in South Chicago during the day and presented his program to a very vast audience in the evening hours with just a handful of sponsors which he secured in his spare time. However, he did persevere in his endeavors, and continued his radio career with WJOB until his retirement in 1952 when the reigns of the program were taken over by yours truly, Wally Skibinski.

The station remained at 449 State Street in downtown Hammond until May 5, 1956 when it erected a new tower and broadcasting facility at 6405 Olcott Avenue in the Woodmar Section of Hammond where it remains until today.

On December 30, 1960 the ownership of the station was sold to Julian Colby and became The Colby Broadcasting Corporation. Judy Grambo started the program called “The Ladies Program” and eventually became the President and Station Manager of WJOB.

The present tower of the station is 405 feet tall and the station today is a twenty-four hour station operating on 1000 watts of power airing a variety of programs, covering local high school basketball and football, as well as college sports events, has four ethnic programs still on the air, including the longest running continuous radio program in the Unities States, which now is call “The Polish Cavalcade of Music” hosted by yours truly, Wally Skibinski, since 1960.

In closing my history of Radio Station WJOB, I would like to leave you with a shorty history of my personal association with WJOB for these many years, which started with Eddie Oskierko in March of 1952. It was through the efforts  of a very personal friend, who enticed me to audition for the Polish Musical Varieties Program, and who is presently the proprietor of the Cavalier Inn in North Hammond. He persuaded me into going to the station for an audition, which I was very reluctant to do. However, I did make an audition tape for Mr. Oskierko and Mr. Adair in the Polish and English languages. I was told by Mr. Adiar that I would become an announcer on the Polish Musical Varieties program for one month at no pay, but simply to see if that was what I wanted to do, I would be hired. It was after the first broadcast that I did in March of 1952, that I was permanently hired as a permanent member of the Polish Musical Varieties Program.

I have been with Radio Station WJOB now for 46 years, beginning my 47 year of radio broadcasting, the first Sunday in March of this year. I have also had the great opportunity to do a live broadcast from a Polka Lounge in the Hegewisch section of the City of Chicago where I did the broadcast with live music every Sunday from 5 to 6 p.m. for 31 years.

It has been said that the “Polish Musical Varieties Program” in conjunction with the “Polish Cavalcade of Music” is the longest running show in the United States. One of my children, of which there are 6, is currently researching this matter with the Guinness World Book of Records.

I would like to express my sincere gratitude to Mr. Yovich of Purdue University Calumet and Dr. Pfeiffer of the Hammond Historical Society for giving me this great opportunity. In closing, I would like to close my remarks as I do my radio program — Until we meet again, may you and yours have a great afternoon and…God Bless.